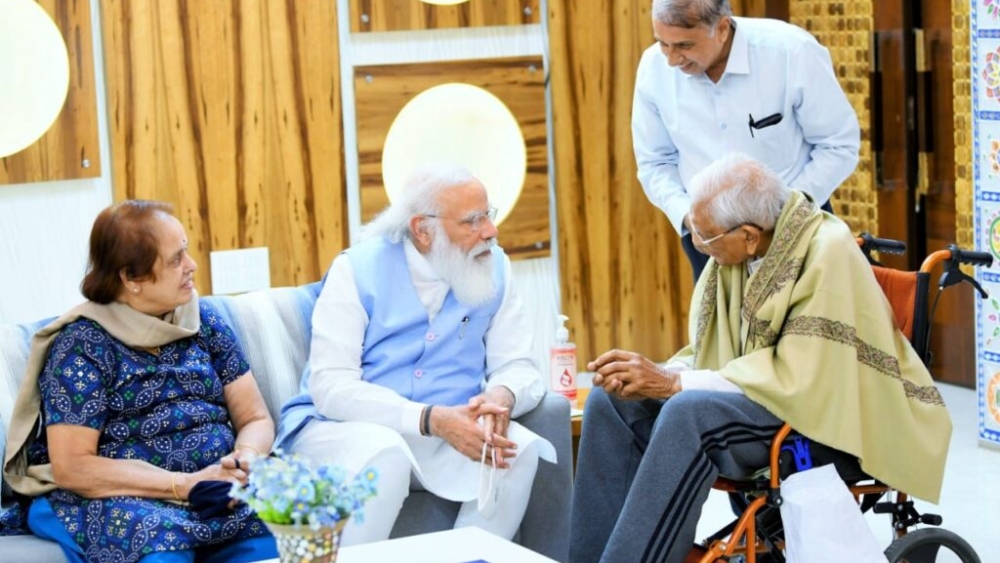 Namaskar. I never thought that a time will come to remember Maheshbhai in this fashion. When Maheshbhai left all of us last month, it was natural for many people like me to feel down.

How many decades of a relations? Even today his face is in front of me. He met with a smiling face and a sense of oneness and tried to engage (for the cause) the person. In many ways, his personality was loved by all and universally accepted. Today when I am standing among all of you colleagues, I am also feeling the same emotions as you that one of our elder colleagues has gone. I am offering Shradhhanjali (tribute) to Maheshhbai and praying to Ishwar to grant him a place at His feet. Raginibahen also made an effort to live as a co-traveler, as a friend of Maheshbhai in the true sense by living Maheshbhai’s thoughts; she was the strength of Maheshbhai.

Looking to Maheshbhai’s career at the M.S. University, his talent, double doctorate degrees and being a membrane technology scientist, it would have been natural for Maheshhbai to think of his own benefit, he could have thought about luxurious life for his family, but Maheshbhai’s Sanskar did not take him on that route. Instead, he concentrated on encouraging others to join with the nation and the society (Samaj), and he kept doing it for his whole life. He was totally immersed in making connection with the first generation immigrants in America and through them with the American born Indian generation and with creative ideas and several programs for children he worked on passing our thoughts, our traditions, and our culture to them.

We know that wherever RSS’s Swayamsevaks went there they endeavored to establish some work based on their Sanskar. In the earlier days, considerable work happened to be carried out in African countries but there the traditions were different, people were different, environment was different and even those who went there were different. Maheshhbai made effort to create a distinct terminology because when Maheshhbai went to America he knew that we would have to answer questions in the minds of the Western world. He worked to employ convincing language to reach out and he created good thinktanks in universities. The work he was doing, and the seed he planted for more than five decades -and he himself had nurtured those seeds- have become such a banyan tree that today even in Maheshbhai’s absence all of you sitting in front of me who grew, nurtured nourished enveloped by that seed of thought will take this work forward.

During emergency (imposed by Mrs. Indira Gandhi) the way Maheshhbai had led a big movement to collect our people around the world, to unite them and to get support from every corner of the world in favor of democracy.

We already know that in Hindustan those who are Sangh families, their homes become kind of an office (Karyalaya of Sangh.) Maheshbhai’s home was also kind of an office only. When a person of our thinking went from Bharat to USA- When Atalji went, he would be at Maheshbhai’s home, when Ashok Singhal ji went, he would be there- everyone would stay there and he would make all necessary arrangements, would worry about them- in a way, his family had become a living office.

When crisis hit Anjleebahen’s life and the way Maheshhbai took care of the whole family – I was a witness in those days- such a big crisis had come in the family but while taking care of everyone Maheshhbai did not lose patience. And he shaped Anjleebahen towards creative life and guided her to become a good, effective volunteer.

Anjleebahen also has left, Maheshhbai also has left but all you colleagues are used to working in unfavorable circumstances. Today the situation is favorable for our thought, the world is eager to know the power of Bharat. People want to know the past of Bharat and also want to be partner in the tomorrow of Bharat. The environment is conducive; in that we will miss Maheshbhai’s not being there, but the Sanskar that he has given, traditions that he has created, systems he has created, will continue to guide us; they will always be a guiding light.

Whether it was about oratory, or about writing, or about winning someone in argument- and I had seen that Maheshbhai did not try to defeat someone. He used dialogue instead of arguments. And he made effort to win (but) his efforts were to convince the other person. And this was the reason that our group of young workers never felt the generation gap. I used to see that all young university students worked under the leadership of Maheshhbai. This itself was uniqueness of Maheshhbai. He used to go to the level of the other person and talk. Once in a while till the end of his life I used to talk to my good and close colleague. I used to keep calling. In the end when I went to Amdavad he came to airport though he was in a wheelchair. He had same joy and happiness on his face, and he was thinking every moment of the nation and about the society.

My prayer to Ishwar is that Maheshbhai’s life will continue to inspire immigrant Bharatiya society, people connected to Vishwa Hindu Parishad of America, all close colleagues of Maheshbhai, his family members and will guide them in new direction.

Good wishes; Thank you very much. One more time I respectfully offer Anjali to Maheshbhai.