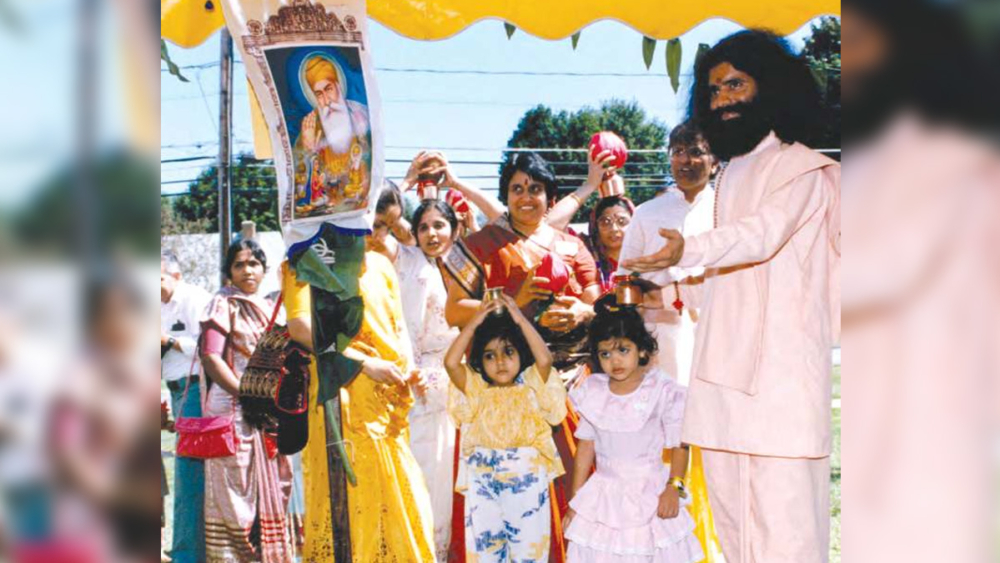 I met Maheshbhai, Raginiben and Anjleeben for the first time in summer of 1975. I had arrived in the US in January. I lived in the same general area in Hartford as did Gaurangbhai and Ashaben. Mrs. Gandhi had recently imposed the Emergency in India and we would get together often to talk about it. It was during one such lazy Sunday afternoon in late July when I ventured in Gaurangbhai’s apartment that I saw these new people. Gaurangbhai introduced them to me. They had come to plan for the VHP programs as well as discuss what we could do to oppose peacefully the Emergency declaration. When I listened to Maheshbhai articulate why we needed to promote our culture and values in this country (fighting the Emergency appeared secondary), I immediately realized that I was listening to someone who was not only a kind, compassionate and a learned person but a visionary (Durendeshi). Rarely had I listened to someone whose words and thoughts resonated with me like his did. Like they say, the rest is history.

During the next several decades, our work continued. Maheshbhai, Raginiben and Anjleeben became a part and parcel of our extended family. During those early days of the VHP, there were quite a few Indians (Hindus) in this country who entertained a preconceived notion that the work we were doing was anti Muslim. They had no idea what we were actually doing. I had seen some of them periodically debate Maheshbhai regarding our work. Maheshbhai would never get angry or engage in harsh rhetoric. He always treated each person with respect and dignity and would tell them that what we were doing was to simply educate the Hindus living in this country about our culture, rituals and value system so they can explain what Hinduism meant to the host community and at the same time impart these traits along to the next generation and generation after that. As he would often say – “We have tough time convincing our own Hindu brothers and sisters that we have a great heritage and we should be proud of it. Our energies are spent on this task. Not that we would ever do it but when are we going to find time to engage in anti-Muslim activities?”  At the end of the dialogue, I would notice that the person on the other side would simply nod in agreement with what he was saying not to mention the enhanced respect he (Maheshbhai) would have earned from him.

Vidya and I were privileged to host them in our house when we had Mahayagna marking the culmination of more than one hundred Hindu Unity Year programs across USA, in Connecticut in summer of 1989. During our forty-five plus years of association, he was always happy to see us. Even though he was an extremely busy person (job, family, VHP work, hosting multitude of foreign dignitaries in their home and arranging for their travel in the US etc.), he never missed reaching out to the people in their time of the need. He visited associates, friends and acquaintances in hospitals and their homes when he learned that they were not well. A few years ago, when my older brother Ranchhoddbhai left his body for his eternal journey, Maheshbhai called me to reminisce about the time he had spent with him. He himself was not doing that well at that time but Maheshbhai being Maheshbhai, he reached out to me. Maheshbhai was a Yugpurush in every sense of the word. We will miss him. Om Shanti.