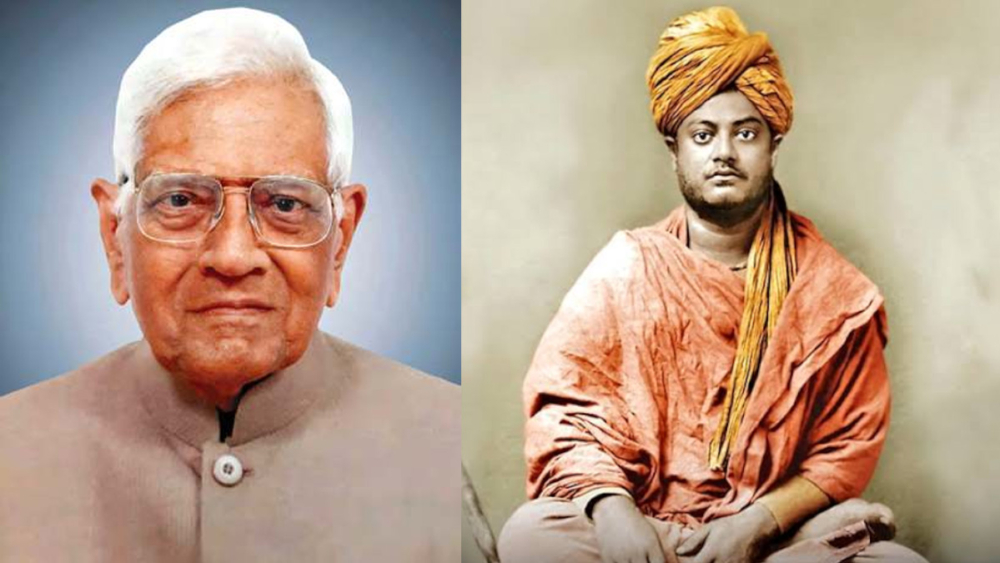 The year was 1984. It was a historic year for Hindus in America. For the first time ever, close to 4500 Hindus, under the auspices of World Hindu Council of America (VHPA) had gathered for the Tenth World Conference at the Penta Hotel in New York. Beyond the exemplary speaker lineup which included Swami Chinmayananda and other prominent Hindu leaders, the conference signified the establishment of a new immigrant community that will, in decades to come, positively impact every aspect of their newly adopted homeland.

I was a student, studying in Syracuse, NY. I was informed about the conference by my friends at Akhil Bhartiya Vidyarthi Parishad (ABVP), the largest Hindu student organization in Bharat. I called the organizers, registered, and signed up to be a participant and a volunteer at the event.

As speakers laid out the vision for Hindus in America, a youth conference held simultaneously provided Hindu youth an opportunity to network with their fellow “second generation” Hindu counterparts and share experiences of what it meant to be in a school with students who had perhaps never met a person with “brown skin” or someone whose parents came from the “land of snake charmers,” or “cow worshippers.”  Remember, this was 1982! The parents wanted their children to remain Hindus, and the youth wanted to discover their Hindu identity. VHPA and this conference made both these goals possible.

I knew my vision to start this university student’s organization and build it from grounds up in a new country would only be possible if it had guidance and support from someone who had the Rastriya Swayamsevak Sangh background. There indeed was. That was Maheshbhai.

While this was my first exposure to VHPA, I soon realized that the VHPA had been doing Bal Vihars and summer family and youth camps since mid-1970s. In fact, Maheshbhai’s most enduring legacy is his pioneering of Balvihar and Family Summer Camps VHPA has organized since its inception. Today, the early participants in the VHPA annual summer camps are making positive difference in all aspects of American life. Recently, we found out that a presidential nominee to a high-level appointment was a participant in VHPA Family Camps and still adheres to Hindu ethos.

Maheshbhai came to the US in 1960s. He was a Sangh Swayamsevak from his childhood, and then, as an adult a Sangh Pracharak (fulltime volunteer) for a decade. He had also served as the President of ABVP in Gujarat. When Maheshbhai came to the US, he was blessed and guided by Pujaniya Guru Golwalkarji who asked him to start the VHPA. Maheshbhai had a clear vision for starting VHPA. In his book “Hindu Philosophy in Action: In Search of Universal Well Being,” Maheshbhai wrote:

“VHPA […] lays emphasis on the idea of Samskara of individual. The lofty principles of Dharma are not meant for mere recitation purpose. […].  The great values of Dharma attain practical significance in sustaining human relationships.”

In the 1984 conference, I saw Maheshbhai giving talks, intermingling with speakers and interacting with volunteers. There is an image embedded in my memory – during a break, I saw Maheshbhai in the hallway. I pulled him aside. I had gone to this conference with an agenda. I recited all that I had written out a few days ago. I told Maheshbhai why VHPA should start an Indian / Hindu student organization in the US. I took 10 minutes from the person who was organizing and presiding over the conference. And what did he do? He did not brush me aside. He did not flaunt his role in VHPA, nor his past background as a Pracharak of Sangh or President of ABVP Gujarat. He patiently listened to me. He asked me to come to the next VHPA Governing Council meeting in Detroit, MI.

That was Maheshbhai. Whether it was speaking with a prominent dharma guru or a national leader, or a student he had never met before, Maheshbhai treated everyone equally, and without ego. The Maheshbhai I met in the conference was the same Maheshbhai I saw through his active years in VHPA and the last time I met him at his home before he went to India. There was never an ego, every interaction was genuine, there was patience, dedicated listening, words that inspired and acceptance of ideas that came from all directions.

His patient listening to this unknown student, inspiring him, supporting, and guiding him, led to the very first student movement outside India – the Hindu Students Council (HSC). Gokul Kunnath, who had similar vision for a student’s organization before we met and I started the activities of HSC, initially known as Hindu Students Federation in 1987, and after Kanchan Banerjee, an amazing organizer, joined, formally as HSC in 1990. HSC then became template for the formation of many Hindu student organizations around the world. Maheshbhai was instrumental in the global Hindu student movement.

Almost 30 years later, this message is as true today as the day it was delivered, and it is certain to resonate with the American Hindu youth for generations.

As a former student leader, advocacy came naturally to Maheshbhai. It must have been divine will that Maheshbhai came to the US in 1960s. In 1975, merely five years after VHPA was established, India faced a bout of autocracy by the then Prime Minister Indira Gandhi. In 1975, Emergency was imposed, and Ms. Gandhi suspended democracy. The movement to restore democracy became a Cause Célèbre for the Hindu community and Maheshbhai took a lead. Under his guidance, Indians For Democracy (IFD) and Friends of India Society International (FISI) channeled the energies of NRI to successfully help restore democracy in India. Long after the end of Emergency, the respect Maheshbhai garnered during those days was evident in the respect he earned from some of the most important political leaders of India, including Prime Ministers Shree Atal Bihari Vajpayee and Shree Narendra Modi.

In 1993, Maheshbhai envisioned seminal event for Hindus in America. The Global Vision 2000 Conference and the Global Youth Conference organized by VHPA commemorated the 100th anniversary of Swami Vivekananda’s speech to the Parliament of World Religions. If Swami Vivekananda introduced Hindu dharma to America, Global Vision 2000 Conference attended by over 10,000 and the Global Youth Conference attended by close to two thousand youth was, in the words of Ma. Shree Ashok Singhal, “kindling the latent pride has convinced me that from now on the Hindus abroad will not only preserve but also promote our culture even in the midst of the confluence of cultures that America is.”  Ma. Ashokji further elaborated, “The Conference had a lasting impact not only on the Hindu world but on the western governments as well.”

I saw Maheshbhai travel across the country for over a year, impressing on the Hindu community the importance of the event, inspiring the volunteers to join the efforts and raising funds. Speakers and cultural performers were invited from all walks of life. The conference faced unprecedented political and financial headwinds. It was Maheshbhai’s astute leadership that overcame these challenges in the ensuing years, ready to take on the next set of challenges. Every century needs someone to reintroduce the message of Swami Vivekananda, in twentieth century America, it was Maheshbhai.

Perhaps it was the scientific research background that Maheshbhai had. Afterall, he was a well-recognized membrane technology researcher that led to accepting new ideas and innovation. In 1993, when I presented the idea of HinduNet, a family of very first Hindu internet sites, Maheshbhai enthusiastically supported it. HinduNet became the first and the largest Hindu website family in the world. Over 200,000 unique visitors visited HinduNet sites. The innovation did not stop there. Maheshbhai eagerly endorsed a unique model to seek outside funding to make HinduNet self-sustaining. When he sensed resistance, Maheshbhai spoke and allayed all concerns of the VHPA Governing Council.

In diverse areas such as serving the educational needs of remotest areas in Bharat or a formal Hindu higher education, Maheshbhai has left his imprint. Today, Ekal Vidyalaya and Hindu University of America are two former VHPA initiatives that are independently making their impact on the society. I recall the years of planning on both projects under Maheshbhai’s leadership.

I approached Maheshbhai in 1997 to initiate the first ever formal Hindu movement against defamation, American Hindus Against Defamation (AHAD) Maheshbhai quickly endorsed the idea. Early AHAD campaigns routinely logged over one hundred thousand signatures and garnered apologies from multinational companies like SONY. Today’s protests activities against defamation of Hindu images, icons, culture etc. under varying names such as Hinduphobia, Hindudvesha, Hindumisa etc. have matured and become global. Maheshbhai’s initial endorsement and support in nurturing this movement must not be forgotten.

Maheshbhai nurtured and guided leaders. He nurtured ideas. He provided limitless support. However, not once, in HSC, HinduNet or AHAD did Maheshbhai come to micromanage. He was always available to help but he trusted us to do the right thing or learn from our mistakes along the way and be our safety net if we ever needed him.

Today, many will reminisce how Maheshbhai enthused them, the incredible organization building skills he possessed or his intellectual depth. However, what I will remember the most is how he made personal connections. When Maheshbhai came to San Diego for work, despite a long day at work, he would find time to meet. He remembered all the details about my family. To all of us, Maheshbhai was not a leader but a respected elder member of our family.

I met Maheshbhai in Boston before he left for Bharat. While he was physically not too well, his intellect was sharp. I sought his blessings for the VHPA work. Of course, he gave his blessings, but he also said, and I paraphrase it, that organizations may or may not be there, but our dharma or philosophy and the impact of our work will always be there. Today, I add to that. Even a visionary leader like Maheshbhai may not be on this earth today, but his ideals, his inspiration, the movement he started will live on in perpetuity.

Ajay Shah, a Karyakarta of VHPA, is the President of VHPA. He was cofounder of Hindu Students Council (HSC), HinduNet and founder of American Hindus Against Defamation (AHAD) and HinduPACT. He hosts an online weekly show on contemporary American Hindu issues, HinduLounge. He has been inspired to work for Hindu causes by Akhil Bharatiya Vidyarthi Parishad (ABVP)