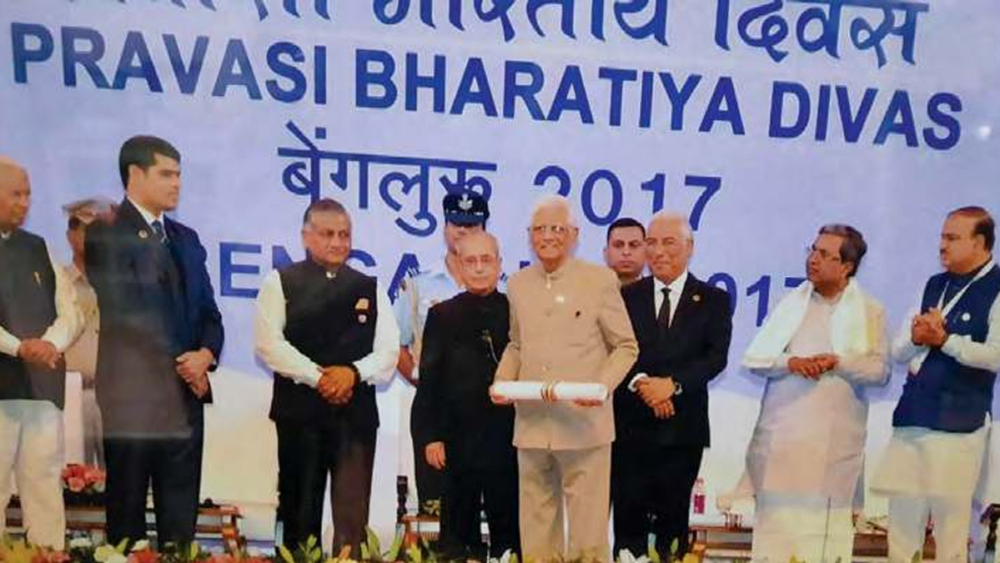 How does one describe a person like Maheshbhai? As a founding member of Vishwa Hindu Parishad of America? Or as an accomplished scientist who held a position as Director of Research and Development of Koch Membrane Systems? Or as an excellent orator and great communicator? Or as an original thinker and a charismatic leader of Hindus around the world? Or as a warm, sensitive and an intelligent human being? Anyone, who was lucky enough to meet him during his eighty-six years of life, would agree that he was all of these – and some more.

I am blessed to call Shri Maheshbhai as my close family member, a mentor, a role model, a guardian, an advisor and an educator. For last 45 years, I have learned a lot from him – about Hinduism, about India, and about life. His uncanny talent to connect science with spirituality, and country with culture always brought deeper meaning to these lofty topics. It was always a pleasure to chat with him on any of the topics and to receive his guidance. Since the day I arrived in America in 1976, he had been a great influence on me and my family.

Almost five decades ago, when the number of Indians in America were very low, when most Indians’ immediate concerns revolved around money, career, and education, when the idea of settling down in this foreign land was not in most people’s hearts yet, when topics such as family, children, and culture were too remote to address, only a person like Maheshbhai could envision the future needs of Indians in America and establish the roots of Vishwa Hindu Parishad of America. And that too, while working hard on his own doctorate degree in Polymer Chemistry at Stevens Institute of Technology (Hoboken, NJ.)

Over his lifetime, Maheshbhai has travelled extensively spreading his vision about India and Hinduism. Impressive as this may be, this is only a partial introduction of Maheshbhai. For he is also a published author with over twenty publications in the field of Physical/ Polymer science and a book “Hinduism in Action.”

And there is even more to Maheshbhai. Despite his many accomplishments, when it came to dealing with people, he always treated everybody – from a high-level politician to an average person – with same dignity, warmth and respect. He enjoyed everything he did.

One of his strongest messages was to “do things that bring you joy.”

“Never do anything that does not bring joy to you” was the mantra he taught me. That joy was reflected in everything he did all his life. As a family member, he was a warm and yet strict disciplinarian. He was a lifelong learner. I remember him learning Bharatnatyam hand mudras from my daughter when she was learning the dance. He started to learn Spanish language after he retired. He was very adventurous at heart and always curious to try new things. He was a fearless leader and a visionary.

His life has left a big impression on me and my family. He will be missed dearly and remembered fondly. There will never be any family event when he will not be missed. May his soul find eternal peace. Om Shanti.

Smt. Meenal Pandya was education coordinator at VHPA youth camps in its early days. She is the author of several books about India’s culture and festivals. Her latest book “Indian Americans of Massachusetts” has documented Indian immigrants’ journey into America – focusing on Massachusetts – and how Indians have become a major cultural and economic influence in both the countries – India and America. Meenal is a sister-in-law to Shri Maheshbhai.