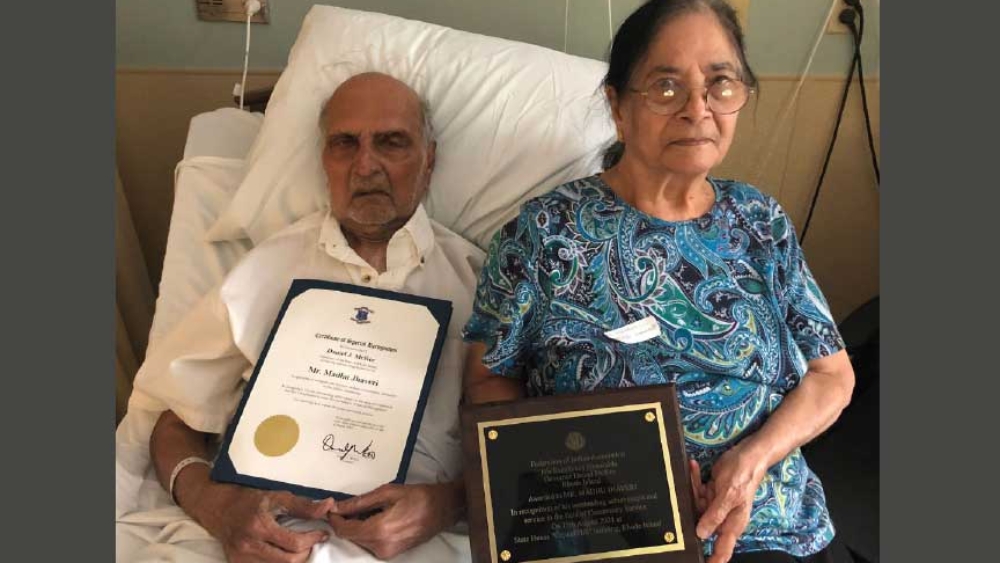 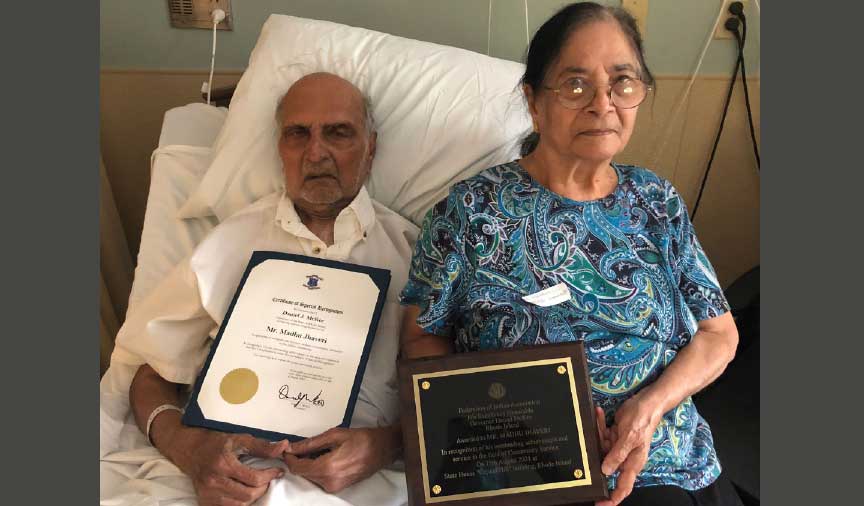 Providence, Rhode Island: August 15, 2021.  On this beautiful sunny day, His Excellency the Governor of the state of Rhode Island Daniel McKee raised the Indian Flag alongside the American flag in front of the majestic State House to honor a sister democracy on the 75th anniversary of her Independence.  A huge backdrop of Indian flag’s tri-colors of Orange, White and Green added to the elegance of the occasion.  The event was attended by several high officials of the State Government including the State Treasurer, Mr. Seth Magaziner.  A large number of people from Indian Diaspora from all over New England states were present to witness the historic occasion.

The Governor recognized several leaders for their long years of service to the community.  Dr. Madhu Jhaveri was one of the main leaders who were recognized.

Dr. Madhu Jhaveri joined the faculty of University of Massachusetts at Dartmouth in 1974 in Civil Engineering department and retired as a full Professor in 2006.  He was very popular among his students for his excellence in teaching.  During his long career he served as a mentor to many students and junior faculty members.  His help to them was not limited to just academic matters but extended to providing ride to them to the airport, helping them find housing, providing food and counseling.  Whatever the challenge, they could count on his support like a family elder.

Along the way, Prof. Madhu Jhaveri founded and/or served in senior positions of several community organizations which are still thriving.  Some of them are India Students Association at UMass Dartmouth, World Hindu Council of America (VHPA), and International Hindi Association.  He started a week-long summer camp for Children in 1979 to impart Hindu ethical values to them which recently observed its 42nd anniversary and served as a model for camps in New Jersey and other states.

Dr. Madhu Jhaveri is a man of many talents.  A book of his poems in Gujarati has been published.  But his most significant contribution is his book Shabd Bharati about coining new words in Sanskrit language which is considered as the mother of most languages of the world.  In this work which is described as a seminal contribution by many, he illustrates how through the use of roots, prefixes, suffixes and qualifiers millions of new technical words can be created to serve human needs far into the future.  The richness of Sanskrit language is apparent because these words are related to the characteristics represented by those words.  Many of his articles on the subject can be found online at Pravakta.com.

Dr. Madhu Jhaveri has also an upcoming new book titled Gaurav Bharati, It’s expected to be published in the last quarter of 2021.

Like many other successful men, he is supported by Mrs Pallavi Jhaveri, his wife of the last 55 years.  They live in Lakeville, MA and are parents to two talented adult daughters.