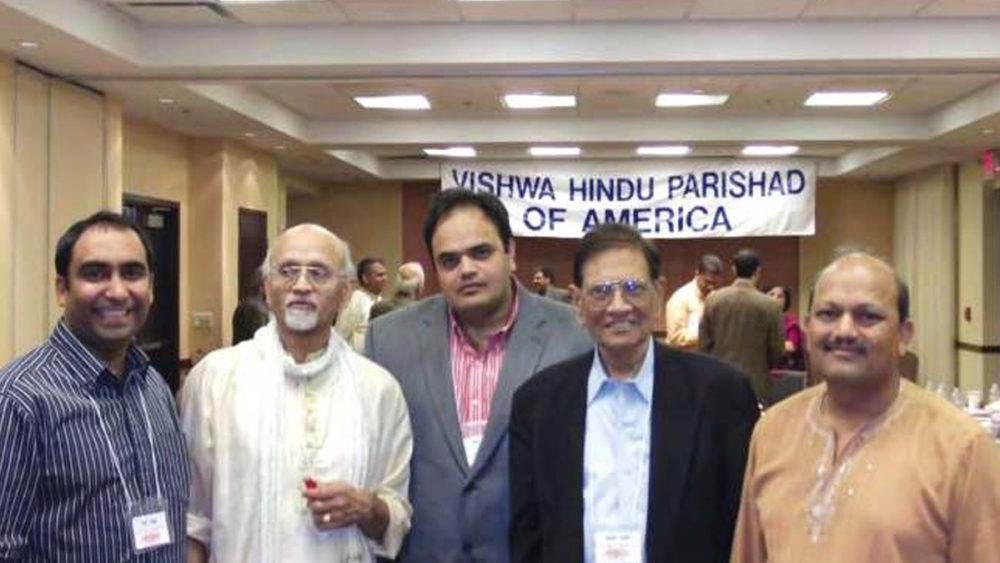 Under his leadership, anti-Hindu forces in the USA were effectively countered and their nefarious projects to defame Hindus, Hinduism were neutralized. I first met him in Atlanta, GA in 2008 at VHPA’s governing council meeting and talked with him in detail about Hindu causes. He attentively listened and expressed interest in my enthusiasm to volunteer for Hindu programs; later I served as a Co-editor of Hindu Vishwa online magazine, founded the VHPA North Houston chapter, and also served in its National Governing  Council.  Maheshbhai was the key motivating factor for Global Indians for Bharat Vikas (GIBV.). His sight infused energy and confidence among Hindu volunteers. During tens of my interactions with Dr. Mahesh Mehta, I was impressed by his acumen, knowledge, and organizational skills. A gentleman with politeness, humbleness, he treated his volunteers with respect and protected them. He was successful in countering Indo-American communists, Radical Islamists organizations, and Pseudo – secularists who propagated Anti Hindu ideologies in the US with an aim to stop the rise of Hinduism in the American landscape.

Dr. Mahesh Mehta was a born leader and patriot, he developed and trained many first and second-generation Hindu Americans as leaders, activists, and socio-political leaders. He protected Hinduism in the US with his engaging speeches, write-ups, and a team of socio-political leaders who had total trust in him. In, the US, the Hindu movement is divided into four categories – Spiritual, religious, social, and political. While spiritual and religious organizations have flourished, there was a dearth of social and political Hindu organizations in the early ’90s, especially pro-Hindu organizations that can effectively protect the spiritual and religious institutions, Hinduism, and mother India from the ideological onslaught of Anti-Hindu forces in the US, funded and supported by a section of radicalized Muslims, far-right Christian and Communists – unfortunately the majority of founders, ideological mentors, and funders of such Anti-Hindu, Anti India are first-generation Indians – who for their vested financial, political and vengeful interests, work against Hindus and mother India.

While Hindu spiritual and religious organizations have no know-how to deal with such dreaded Anti-Hindu forces, they rely on Hindu social and political organizations in the US to protect them. Due to such bad publicity about Hinduism, racial crimes against Hindu Americans were on the rise and many have died due to fatal shootouts, physical assaults by a few misguided local American’s who become victims of Anti-Hindu content published in news and attack Hindu worship sites, priests, and Hindu students, business owners, etc. with a justified mindset. Earlier, when any Hindu leader used to visit the US, these miscreants started negative propaganda, due to which many Hindu temples, universities canceled events. Anti-Hindu defamatory documentaries like ‘Sita Sings the Blues’, ‘Dr. Wendy Donigner’s book’ were openly published. There was no space for Hindu organizations in US political setup. Hindu temples were not united, no news media channel, portal, or newspaper was used to cover Hindu events. Hindu sacred symbol ‘Swastika’ was made a symbol of hate. There have been multiple attempts to start Anti Hindu riots in the US. However, such acts were effectively neutralized by Hindu social organizations in the US and major credit goes to Dr. Mahesh Mehta who founded and co-founded a battery of Hindu organizations, trained and mentored tens of senior-level Hindu leaders, activists and established a great network of these organizations to work together for the empowerment of Hinduism in America.

In 2014, he established GIBV – Global Indians for Bharat Vikas, led by Gaurang Vaishnav, a senior Hindu American leader and an intellectual of a high standard. GIBV was instrumental in mobilizing Hindu Americans and Hindus living in many other parts of the World to collectively work with one single point agenda – ensuring Narendra Modi’s victory in the 2014 General elections in India, many programs like editorials, millions of phone calls to India, press releases, Chai pe Charcha and other standard political programs were launched at a global level, I was Southeast US convenor of GIBV. Now Hindu Human rights have more say in the US Govt. , Senators, Congressmen are more interested to entertain Hindu voices raised by religious, social leaders, and India – the motherland of worldwide Hindus is safer than was the situation during Congress party governance. Hindus in India, America, and elsewhere now feel prouder of their traditions, heritage, and religion. Earlier, the Hindu word in the US was taken with caution, as it may have invoked the wrath of first generation Anti Hindu Indians. Such was the fear that even Indian Media in the US used to outrightly reject press releases of Hindu organizations (the key reason why I founded World Hindu News). Now, being Hindu is a matter of pride and incorrect content in cyberspace is gradually getting replaced with the right information. Post 9/11, Americans have awakened and now, they very well understand that Hindus of America are one of their best well wishes, friends and are educated peaceful, and rich cultured community.

Yoga, Hindu curriculum is fast becoming an integral part of US universities. Hindu festivals holidays are being approved by many states. One can see Hindu conferences, seminars, and events in US cities. Hindu books are getting published. Conversion among Hindu Americans has is at a minimum, for example in 2010, when hundreds of Bhutan Hindu refugees arrived in the US, many were converted, and all would have been converted if VHPA wasn’t there. I worked with the VHPA Atlanta team under the guidance of Mrs. Sneha Mehta, a senior Hindu leader. Hindu temples are being united under Hindu Mandir Executives’ Conference (HMEC) – A VHPA project. Hindu University of America is offering degrees and courses in Hinduism, Hindu Swayam Sevak Sangh (HSS) is involved in tens of big social service projects, Hindu Students Council (HSC) is helping Hindu students in US universities to work for Hindu empowerment, United States Hindu Alliance (USHA) is working towards Hindu advocacy in the US, HINDUPACT is powering up Hindu issues with US Govt.,  Overseas Friends of BJP (OFBJP) is safeguarding BJP’s interests in US polity and many other organizations are now successfully established, all of the above are either founded or co-founded by Dr. Mahesh Mehta.

Hindu temples are flourishing in the US and nowadays, anti-Hindu crimes are at bay. Such changes don’t occur in days, months, or years – it takes decades of hard work, passion, and continuous community involvement of leaders like Dr. Mahesh Mehta, who dedicated his life to the Hindu cause and is an inspiration for thousands of Hindus. Individuals whom he mentored are now leaders of Hindu American organizations in the US, India, Europe, Asia, Middle East. We are proud of you Maheshbhai, we will miss you forever, your work will inspire generations of Hindus to volunteer for the Hindu cause.

Rahul Chandra Sharma is the  President and Editor-in-Chief of World Hindu News (www.worldhindunews.com,) and  Vishwa Hindu Samachar digital news portals. He is also the director of the Pakistan Hindu Refugee Relief Program and has been associated with Indian and US Hindu organizations since 2005 in various organizational capacities.